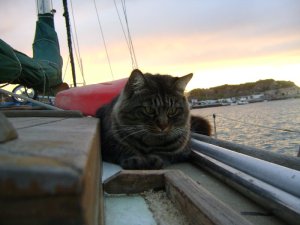 seems bubba was bitten by a semi-feral neighbor cat–grew a big lump where he was bitten on back of neck. if this doesnt diminish by mon or if it opens by then, at 1800 mon eve, bubba again sees the vet for treatment. pooor bubba.
cat bite are not cool, especially when the cat attacks in and on bubba’s own boat.

Toll Increase for Panama Canal Announced
Posted on April 25, 2012 by sarah
This is not great news for many cruisers, but be sure to take it into account if you have plans to head through the Panama Canal after July 1.

The board of the Panama Canal Authority (ACP) has approved a toll increase of 15% in two years on seven types of large ships and from 60% to 113% for small vessels passing through the Panama Canal as of July 1. The proposed change approved last Wednesday also increases tolls on eight to eleven distinct types of ships passing through the waterway, which “seeks to approximate the amount of toll to the value offered by the interoceanic route to their users,” detailed the ACP in a statement.

The segments will be defined as: container, general cargo, container / bulk cargo, refrigerated cargo, bulk dry, tankers, gas carriers, car carriers, ro-ro and passenger and others. Those with recorded increases of 15% (7.5% in 2012 and the same percentage in 2013) are general cargo, containers/breakbulk, bulk dry, tankers, chemical tankers and others (those not covered by any of categories). Car carriers and ro-ro (roll-on/roll off, equipped with ramps) will increase by only 1.6 to 1.7% in the toll from July 1, said the statement of the proposal. The rate for each segment is calculated on a table that gives a price for the first 10,000 tons, one for the next 10,000 and a third rate for the rest.

About the increases, the ACP administrator Alberto Aleman, said the proposal brings the tolls closer to the value and quality advantages offered by the route through the Panama Canal, while maintaining the competitiveness of the route.

“The ACP reaffirms its interest in maintaining a dialogue with the industry to enable us to structure a system of tolls according to the needs of our users which results in benefits for themselves and for Panama,” Aleman said.

For the complete story, go to http://www.panama-guide.com.